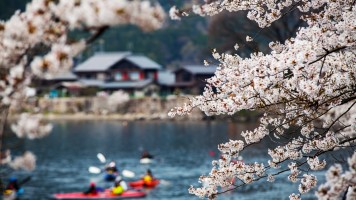 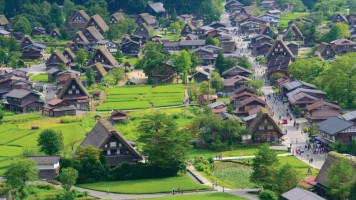 Occupying an enviable space in the centre of Japan, and crowned by lofty mountains, Nagano is a rightly called the “Roof of Japan”. Formerly Shinshū, Nagano Prefecture draws travellers with its natural bounties, architectural wonders, rich cultural history and delicious cuisine.

Once a temple town centred around the imposing Zenkō-ji, Nagano still attracts pilgrims to its revered doorstep. The first image of the Buddha was brought here in 522 AD, and is kept away from the public eye, but perhaps, the popularity of this ornate temple stems from its warm welcome to Buddhists from all sects, including women.

Volcanic mountains, like the iconic Mt. Fuji, Mt. Nasu-yama and Mt. Norikura-dake as well as the majestic Japanese Alps, make the area rich in hot springs. Visit the Jigokudani Wild Monkey Park to watch snow monkeys frolicking in the onsen – the only place in the world you will see this.

Make a stop at Kamikochi, a well-known resort in the Northern Japanese Alps, if you love nature. A densely wooded plateau in the Azusa River Valley, it offers picturesque hiking trails through spectacular mountain scenery, including snow-capped peaks, gurgling brooks, thick forests, and fascinating wildlife.

Come summer, and the highlands bloom in a riot of alpine flowers, enthralling hikers and mountaineers with their delicate beauty. Winter beckons with its enticing snowy slopes that promise hours of skiing, while autumn turns the colours of the leaves into blazing crimson, transforming the slopes into a fairytale. The views from Mt. Goryu are incredible, especially on a clear day when you can even see Mt. Fuji. Kamikochi is open from mid April to mid November, so there’s still time! This highland valley has been well preserved within the Chūbu-Sangaku National Park.

Don’t miss the stunning views from the platform in Senjojiki Cirque, spread on the slopes of the Japanese Central Alps, with its lush grasses in spring, myriad flowers in summer, fall colours in autumn and an imposing, white landscape in winter.

Closer to Nagano’s cities, visit Matsumoto’s castle, its national treasure, set against the rugged Japanese Alps. Karuizawa is Nagano’s most popular summer resort, offering opportunities for golf, tennis and extensive shopping. Being the host of the 1998 Winter Olympics made Nagano City almost as famous as its Zenko-ji Temple. Togakushi leads you on a spiritual journey across its 5 shrines, while Shiga Kogen and Nozawa Onsen ski resort village invite you to their ski slopes with their outstanding powder snow and balmy hot springs at wintertime.

On the culinary scene, Nagano is best known for its Shino Soba (buckwheat noodles). However, Oyaki, small buns filled with vegetables or meat, are characteristic of the region, as are its Juicy apples, chestnuts and sake. If you’re feeling especially adventurous, try Basashi (raw horse meat) and Inago (locusts) too!

This inland Prefecture reflects both Eastern and Western cultures, and has been drawing visitors by the millions for its beauty and spirituality.

If you are planning a trip to discover Nagano, do not hesitate to contact your luxury travel designer Mr. Isao Numano.